ALL OVER, BAR THE SHOUTING? …..By Jim Thomas. 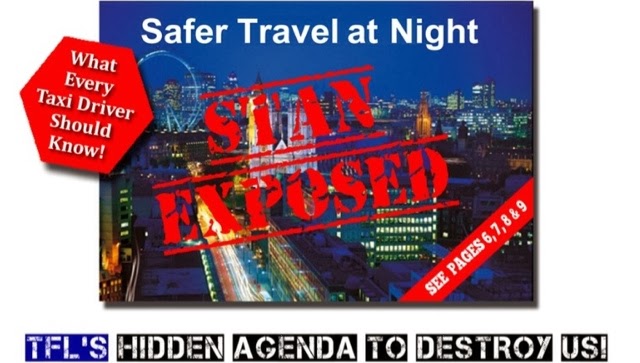 Most of the trade are completely unaware just what lies in store for us in the new year. The majority believe what they are fed by the Vichy trade press, which purveys the myth that everything is in hand and under control. Truth is, we are in dire straits and it’s not going to get any better by carrying on regardless.
Most subscribers to trade representative bodies haven’t got a clue what’s going on and to be honest, don’t really care.
A short while ago the trade received a wake up call from the most important tool we have ever seen, the United Cabbies News. Sadly, because of the general apathy and lack of support, this publication was consigned to the annals of history and now sadly along with it, the United Cabbies Group. Remember my prediction from last year: “When the final battle comes, there will be no one left to lead the fightback”.

So, what went wrong:
Our licensing authority (TfL) have for some time, been running an agenda towards harmonising both Private Hire and Hackney Carriage. Project Horizon (incorporating the STaN Agenda) has been implemented over the last ten years or so, in a number of separate phases.
Horizon covers a multitude of strategies which also include cutting back TfL staff to the bone, selling off TfL property and outsourcing many departments workloads.
Current phases have seen the lowing of our standards, while giving our competitors more and more respectability. Previously, our trade leaders did nothing as suburban ranks were given away to PH. This was followed by a major expansion of licence variations (satellite offices). Uniformed cab enforcement, replaced by compliance with no powers, plus TfL/LTPH showed a total disregard to enforcement of illegal plying for hire. Testament to this is the fact that since TfL took control of Licensing Taxis from the Met, there has been just one conviction for this offence.
We have seen many venues where minicabs are allowed to openly flout the law, forming unlawful ranks, illegally plying for hire and touting. Some PH companies rarely dispatch work in the traditional manner. They operate solely from venues, with clipboard Johnnies feeding illegal rolling ranks. This factor alone has seen the number of serious sexual assaults in unbooked minicabs go through the roof. Police estimates put this figure at around 25 such attacks weekly. Victims are seen by the authority as collateral damage.
But to find the tipping point for our troubled future, we must look at what happened with the Olympic issue.
TfL used anti terrorist legislation to stop mass demonstrations and sidelined our trade at venues, moving Taxi ranks out of sight.
They then heavily promoted private hire, giving them waiting areas outside exits. Research by Westminster City Council has previously shown that passengers leaving events will get into the first mode of transport they see waiting outside the exit when leaving.
Along with being hidden away, we were also banned from the Olympic road network. The reason, simply because of demands from sponsors who didn’t want to compete with liveried Taxis.
A minority stood up and demonstrated against the attack, but the major representative groups refused to get involved for fear of being black balled from the prestigious emgagement policy, another stroke of genius from the men in grey suits at Blackfriars.

The Olympic issue could have easily been won, as was the case in Sydney and Beijing, which saw just threats of mass demonstrations by their united trades, winning the day.
We’ve seen what can be achieved only recently, by our French colleagues in Paris. With just the mention of a demonstration their demands were met in full. Basically because the authority in Paris know the French taxi drivers would stand united.
Once TfL saw the piss poor resistance to their Olympic proposals they knew the Taxi trade could be defeated on every level.
The solidarity this trade enjoyed in the 70’s and 80’s, simply fell by the wayside, being replaced by decades of general apathy.
Most of today’s drivers are oblivious to the successes gained by our trade when, under leadership from the Transport and General workers union (now Unite),we won various issues against a similar onslaught from the GLC.
Over the years, perceived militant action has been bought off in secret meetings, with private contracts, offers of highly paid marshalling jobs and more recently, continued inclusion to the inner circle of engagement.
During the Olympics, the carrot dangled on a stick (better known as the Cabbies Cabinet), was waved in front of the last few dissenters standing.
We were informed of the possibility of an elected representative on the board of TfL to complement the Mayors appointed advisor.
We were told: “Do you want to be confined to the outside pissing in, or would you rather be on the inside pissing out?”
Promises, that later proved to be complete lies.
Now, having served its purpose, LTPH is kicked into touch.
The lines between us and PH have been purposely blurred, with entrepreneurs from within our own trade, building financial empires working alongside the competition. Worst of all, the general state of apathy, which plagues the vast majority of the rank and file, has been instilled and kept alive by selected, sanitised trade press.
How do we move forward?
The parasites have to be removed before we can get anything near unity. Their trolls infiltrate blogs, forums, cab shelters and meetings like a virus, spreading lies and perpetuating the myth that “all’s well”.
At present, the trade orgs currently available to us, offer little or no solution. Most are run for the self-gratification of the chosen few. Unless the membership of these benign trade bodies stand up and demand action, it’s all over bar the shouting. 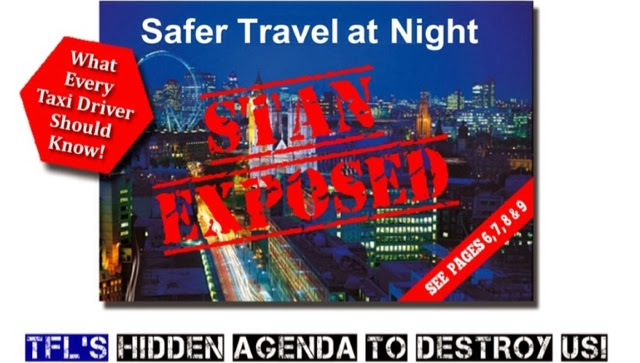 Project Horizon, spawned the award winning STaN report.
The STaN Agenda….was totally ignored and unchallenged by the trade.
We then saw the emergence of Satellite offices….these went unchallenged with the cost to build out office space.
Next came the proliferation of clipboard johnnies, resurrected from a seedy past, supported by minicab marshals….they also went unchallenged.
The begining of the end.
Now TfL’s legal department have stated PH can legally wait to become hired outside venues….so far as we know, this has also been unchallenged.
Yes we have had a decent year
Yes the work levels have been good throughout the recession
But it’s all about to change, with a new set of rules, put in place by the insistence of large transport groups owned by vast multi-nation financial institutions.
The writing has been on the wall for some time, the clues are all there. You don’t have to be a genius, apathy rules and in the world of the blind, the man with only one eye is king.
It’s not hard to defeat an army who won’t fight back.
Our complete demise has only been held back by a few active militants.
As a great man once said:
“Never has so much been owed, by so many, to so few”.
But the few are getting fewer by the week.
And who really is to blame for all this?
It’s YOU, the driver who can’t be bothered.
It’s YOU, who continue to pay subscriptions without question.
It’s YOU, the “I’m all right jacks” of the trade.
While this situation remains, TfL will piss all over us and we will have no hope.
Yes the UCG came close, but collapsed.
Basically because YOU never gave them the support needed to finish the job.
What does the future hold for the trade?
In 2014, the true fate of our trade will emerge.
PH sharing our major ranks, using wheelchair accessible vehicles, plus our sole right to ply for hire, the reason we spend on average 44 months “doing the knowledge”will soon be gone forever.
Steve McNamara, vice general secretary of the LTDA when asked to meet the RMT and discuss a united trade action plan said;
“We don’t see the same dangers in the law commission as you”
But at least he replied, unlike the LCDC and Unite, who just ignored the invite.
Addison Lee are about to replace their fleet of Ford Galaxys with Wheelchair accessible (WAV) Mercedes Vitos. Cheaper than their Taxi counterpart, because they don’t have to meet the same strict conditions of fitness (RWS)
Peugeot, Citroen and Fiat, are currently in talks to take TfL to the European Court in their bid to introduce their used vehicles logan ut into the London market. 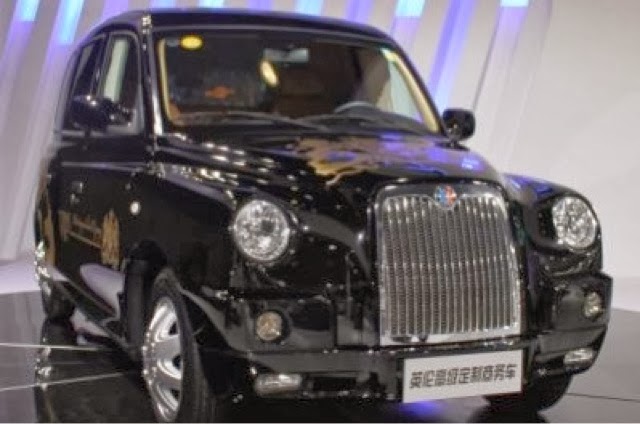 Geely’s will soon be launching the PH version of its TX4.

The distinction between taxis and minicabs will be diminished.
One myth that needs dispelling, is that PH companies don’t want their drivers to be able to ply for hire, as they can’t make money out of that.
Many PH companies already operate solely from their vehicles plying for hire outside clubs and bars. Most of the larger PH companies are in the process of moving over to rental and leasing services. PH owner-driver circuits are gradually disappearing, being bought up by the bigger boys in the business.
We now have companies that have hundreds, even thousands of vehicles, where once minicab firms were considered large, if they had a couple of dozen drivers at their disposal.
If this were more than a myth, Com Cab, Dial a Cab and Radio Taxis would have disappeared years ago. They’ve had no problem with their drivers plying for hire.
The die has been cast and deals has been done.
Griffin and sons are no longer major players after selling control of their companies to the Carlyle Group, who in preparation for the Law Commission proposals, are presently buying up PH operators all over the country, to form a nationwide network.
Do they know something we don’t know?
We’ve been informed that the Law Commission (LC) mean to introduce a national standard for PH and that plying for hire is not to be defined in law and current restrictions on cross border hirings will be dropped nationally.
Why do you think the LC didn’t published their draft proposals earlier in December?
It’s the lemmings who will be the first ones jumping up and down screaming “why did no one do anything”.
The answer is they did…………the truth is, it’s YOU that let them down.
This from our Liverpool colleagues:
THE LIVERPOOL HACKNEY AND PRIVATE HIRE TRADE ARE BEGINNING THE FIGHT BACK WITH THIER UNPRECEDENTED VOTE OF NO CONFIDENCE, AND THE RESPONSE FROM THE COUNCIL HAS SO FAR BEEN PROMISING
With so many attractions in Liverpool and the business of the travel in this wonderful city, the Liverpool cab and private hire trade have begun operation clearout, which will see the perpetrators of underinsured operators pushed back beyond the city boundaries, those scabs who steal our work don’t like the truth to be told